THIS IS THE REASON WE DO WHAT WE DO

Suicide prevention is a collection of efforts to reduce the risk of suicide. Beyond direct interventions to stop an impending suicide, methods may include:

General efforts include measures within the realms of medicine, mental health, and public health. Because protective factors[1] such as social support and social engagement—as well as environmental risk factors such as access to lethal means— play roles in suicide, suicide is not solely a medical or mental-health issue.[2]

National Suicide Prevention Lifeline, a crisis line in the United States and Canada

Many methods have been developed in an effort to prevent suicide. The general methods include: direct talks, screening for risks, lethal means reduction and social intervention. The medication lithium may be useful in certain situations to reduce the risk of suicide.[3][4] Talk therapies[5] including phone delivery of services may also help.[6] Individuals with access to proper mental health care, a sense of belonging, good problem-solving skills, and a system of beliefs that discourages suicide are less likely to attempt suicide.[7]

Means reduction ⁠— ⁠reducing the odds that a suicide attempter will use highly lethal means ⁠— ⁠is an important component of suicide prevention.[8] This practice is also called "means restriction".

Researchers and health policy planners have theorized and demonstrated that restricting lethal means can help reduce suicide rates, as delaying action until depression passes.[9] In general, strong evidence supports the effectiveness of means restriction in preventing suicides.[10] There is also strong evidence that restricted access at so-called suicide hotspots, such as bridges and cliffs, reduces suicides, whereas other interventions such as placing signs or increasing surveillance at these sites appears less effective.[11] One of the most famous historical examples, of means reduction, is that of coal gas in the United Kingdom. Until the 1950s, the most common means of suicide in the UK was poisoning by gas inhalation. In 1958, natural gas (virtually free of carbon monoxide) was introduced, and over the next decade, comprised over 50% of gas used. As carbon monoxide in gas decreased, suicides also decreased. The decrease was driven entirely by dramatic decreases in the number of suicides by carbon monoxide poisoning.[12][13] 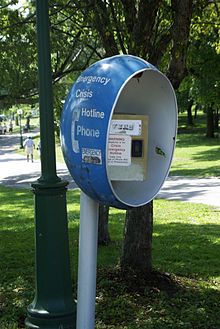 It has also been suggested by NSSP that media should prevent romanticising of negative emotions and coping strategies which can lead to vicarious traumatization. The Centers for Disease Control and Prevention (from a 1994 workshop) and the American Foundation for Suicide Prevention (1999) have suggested that TV shows and news media can help prevent suicide by linking suicide with negative outcomes such as pain for the suicide and their survivors, conveying that the majority of people choose something other than suicide in order to solve their problems, avoiding mentioning suicide epidemics, and avoiding presenting authorities or sympathetic, ordinary people as spokespersons for the reasonableness of suicide.[18]

There are multiple evidence-based psychotherapeutic talk therapies available to reduce suicidal ideation such as dialectical behavior therapy (DBT) for which multiple studies have reported varying degrees of clinical effectiveness in reducing suicidality. Benefits include a reduction in self-harm behaviours and suicidal ideations.[21][22] Cognitive Behavior Therapy for Suicide Prevention (CBT-SP) is a form of DBT adapted for adolescents at high risk for repeated suicide attempts.[23][24]

The World Health Organization recommends "specific skills should be available in the education system to prevent bullying and violence in and around the school premises in order to create a safe environment free of intolerance".[25]

Coping planning is an innovative strengths-based intervention that aims to meet the needs of people who ask for help, including those experiencing suicidal ideation.[26] By addressing why someone asks for help, the risk assessment and management stays on what the person needs, and the needs assessment focuses on the individual needs of each person.[27][28] The coping planning approach to suicide prevention draws on the health-focused theory of coping. Coping is normalized as a normal and universal human response to unpleasant emotions and interventions are considered a change continuum of low intensity (e.g. self-soothing) to high intensity support (e.g. professional help). By planning for coping, it supports people who are distressed and provides a sense of belongingness and resilience in treatment of illness.[29][30] The proactive coping planning approach overcomes implications of ironic process theory.[31] The biopsychosocial[32] strategy of training people in healthy coping improves emotional regulation and decreases memories of unpleasant emotions.[33] A good coping planning strategically reduces the inattentional blindness for a person while developing resilience and regulation strengths.[29]

Postvention is for people affected by an individual's suicide, this intervention facilitates grieving, guides to reduce guilt, anxiety, and depression and to decrease the effects of trauma. Bereavement is ruled out and promoted for catharsis and supporting their adaptive capacities before intervening depression and any psychiatric disorders. Postvention is also provided to intervene to minimize the risk of imitative or copycat suicides, but there is a lack of evidence based standard protocol. But the general goal of the mental health practitioner is to decrease the likelihood of others identifying with the suicidal behavior of the deceased as a coping strategy in dealing with adversity.[34] 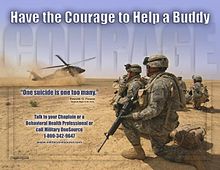 The traditional approach has been to identify the risk factors that increase suicide or self-harm, though meta-analysis studies suggest that suicide risk assessment might not be useful and recommend immediate hospitalization of the person with suicidal feelings as the healthy choice.[35] In 2001, the U.S. Department of Health and Human Services, published the National Strategy for Suicide Prevention, establishing a framework for suicide prevention in the U.S. The document calls for a public health approach to suicide prevention, focusing on identifying patterns of suicide and suicidal ideation throughout a group or population (as opposed to exploring the history and health conditions that could lead to suicide in a single individual).[36] The ability to recognize warning signs of suicide allows individuals who may be concerned about someone they know to direct them to help.[37]

Suicide gesture and suicidal desire (a vague wish for death without any actual intent to kill oneself) are potentially self-injurious behaviors that a person may use to attain some other ends, like to seek help, punish others, or to receive attention. This behavior has the potential to aid an individual's capability for suicide and can be considered as a suicide warning, when the person shows intent through verbal and behavioral signs.[38]

Suicide prevention strategies focus on reducing the risk factors and intervening strategically to reduce the level of risk. Risk and protective factors, unique to the individual can be assessed by a qualified mental health professional.

Some of the specific strategies used to address are:

Many non-profit organizations exist, such as the American Foundation for Suicide Prevention in the United States, which serve as crisis hotlines; it has benefited from at least one crowd-sourced campaign.[41] The first documented program aimed at preventing suicide was initiated in 1906 in both New York, the National Save-A-Life League and in London, the Suicide Prevention Department of the Salvation Army.[42]

Suicide prevention interventions fall into two broad categories: prevention targeted at the level of the individual and prevention targeted at the level of the population.[43] To identify, review, and disseminate information about best practices to address specific objectives of the National Strategy Best Practices Registry (BPR) was initiated. The Best Practices Registry of Suicide Prevention Resource Center is a registry of various suicide intervention programs maintained by the American Association of Suicide Prevention. The programs are divided, with those in Section I listing evidence-based programs: interventions which have been subjected to indepth review and for which evidence has demonstrated positive outcomes. Section III programs have been subjected to review.[44][45] 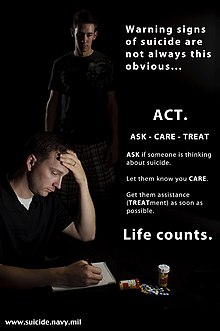 An effective way to assess suicidal thoughts is to talk with the person directly, to ask about depression, and assess suicide plans as to how and when it might be attempted.[46] Contrary to popular misconceptions, talking with people about suicide does not plant the idea in their heads.[46] However, such discussions and questions should be asked with care, concern and compassion.[46] The tactic is to reduce sadness and provide assurance that other people care. The WHO advises to not say everything will be all right nor make the problem seem trivial, nor give false assurances about serious issues.[46] The discussions should be gradual and specifically executed when the person is comfortable about discussing their feelings. ICARE (Identify the thought, Connect with it, Assess evidences for it, Restructure the thought in positive light, Express or provide room for expressing feelings from the restructured thought) is a model of approach used here.[46]

Warning signs of suicide can allow individuals to direct people who may be considering suicide to get help.[37]

Additionally, the National Institute for Mental Health includes feeling burdensome, and strong feelings of pain—either emotional or physical—as warning signs that someone may intend attempt suicide.[37]

Some signs that someone may attempt suicide include:[37]

The U.S. Surgeon General has suggested that screening to detect those at risk of suicide may be one of the most effective means of preventing suicide in children and adolescents.[47] There are various screening tools in the form of self-report questionnaires to help identify those at risk such as the Beck Hopelessness Scale and Is Path Warm?. A number of these self-report questionnaires have been tested and found to be effective for use among adolescents and young adults.[48] There is however a high rate of false-positive identification and those deemed to be at risk should ideally have a follow-up clinical interview.[49] The predictive quality of these screening questionnaires has not been conclusively validated so it is not possible to determine if those identified at risk of suicide will actually commit suicide.[50] Asking about or screening for suicide does not create or increase the risk.[51]

In approximately 75 percent of completed suicides, the individuals had seen a physician within the year before their death, including 45 to 66 percent within the prior month. Approximately 33 to 41 percent of those who completed suicide had contact with mental health services in the prior year, including 20 percent within the prior month. These studies suggest an increased need for effective screening.[52][53][54][55][56] Many suicide risk assessment measures are not sufficiently validated, and do not include all three core suicidality attributes (i.e., suicidal affect, behavior, and cognition).[57] A study published by the University of New South Wales has concluded that asking about suicidal thoughts cannot be used as a reliable predictor of suicide risk.[58]

In the United States it is estimated that an episode of suicide results in costs of about $1.3 million. Money spending on appropriated interventions is estimated to result in a decrease in economic loses that are 2.5 fold greater than the amount spent.[65]